What HTTP headers googlebot is requesting?

I decided to write a blog post about googlebot's HTTP headers because as far as I know in SEO community, it is a topic which has not been attracted much attention so far. To put it another way, it may be my mistake but I don't remember having seen some blog posts, articles mentioning what HTTP headers googlebot is requesting in SEO blogs.

Please find below some of the HTTP headers googlebot is sending to an HTTP server meaning actual googlebot crawls with the server responses to requests.

Googlebot HTTP Headers: Request a CSS file with GET method 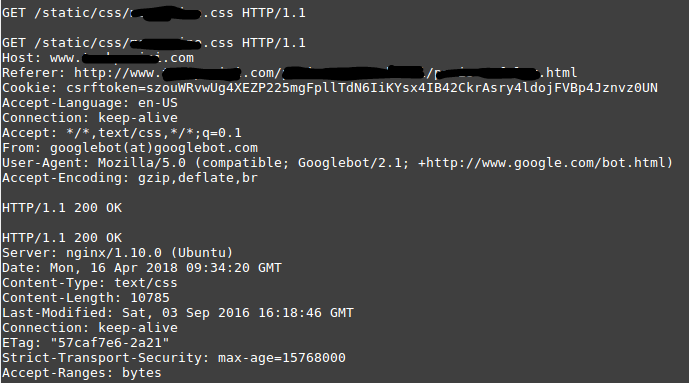 Why knowing what HTTP Headers a crawler requests is important?

It is important in the sense that when you say to your clients, you will crawl their sites as googlebot crawls then you should be sure of requesting the same HTTP headers as googlebot from their servers. The response information and later data you collect from a server depend on what you request in your crawlers HTTP headers.

Imagine a server which supports brotli and your crawler requestsAccept-Encoding: gzip,deflate but not Accept-Encoding: gzip,deflate,br.It is not known beforehand how the server will respond in that case, not receiving br in Accept-Encoding HTTP header request, since it is very unlikely but it can even respond with 406 Not Acceptable.But hopefully at the end you would not say to your client that there are crawl performances problems on their site cause it is your crawler  which doesn't support brotli and this is neither your client's nor the server's fault.

Another scenario can be; a web page which returns different content based on the perceived country or preferred language of the visitor, in other words the web page returns different content in different languages. Google call this as locale-adaptive pages. Actually it is the case of my blog http://www.searchdatalogy.com  3 different contents in 3  different languages; English, French and Turkish on the same URL can be served from it. If you send Accept-Language HTTP header in French in your crawler's HTTP headers to a website like mine, your crawl will be completely different than googlebot's crawl in most cases. Yes, sure googlebot can set an Accept-Language header in other languages  than English when it does local aware crawling but most of the time the language it prefers to speak is its own language English. You can find more information about googlebot's local aware crawling here https://support.google.com/webmasters/answer/6144055?hl=en . Now, you may be thinking who in the world will request a page in French language from their crawler, this might not be an SEO scenario but a movie scenario. Well, if you were a French citizen and coincidentally, you and your friends have a very bizarre hobby which is to develop and test crawlers then believe me it is very likely that you finish crawling a site like mine in French one day or other.

Is my site in google's mobile first index? 4 years, 7 months ago

Hsts on google.com 6 years ago

"Two design changes together yields an ALBERT-base model that has only 12M parameters, an 89% parameter reduction c… https://t.co/d1mGqYESQ4
2 years, 7 months ago